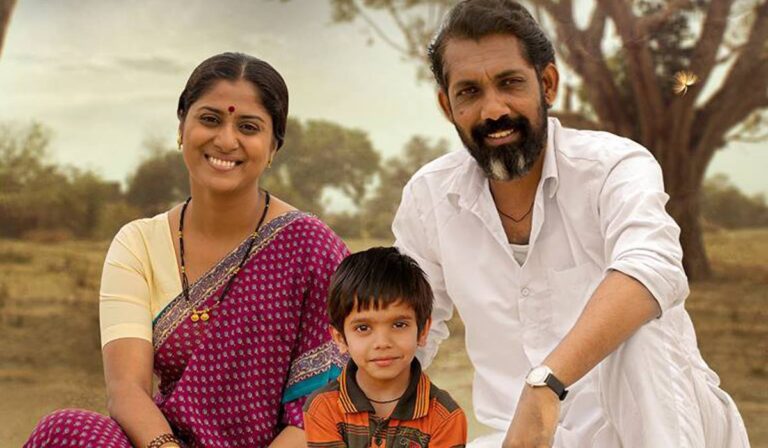 Naal as the title suggest is umbilical cord tested from child’s point of view. As the story is loosely based on childhood of Shri Krishna and his relationship with Yashoda, the narrative of the film moves forward as the child is made aware that she is not his real mother. The characters are well portrayed by Sriniwas Pokale as Chaitanya Bhosale aka “Chaitya” and Devika Daftardar as Suman Bhosale aka “Sumi” depicting Krishna and Yashodha. While his father Shankar Bhosale played by Nagraj Manjule is landlord of a village which is alienated by access and setup at a bank of river. He has his own farm and is a learned man with some power as depicted through the imagery where he is sitting at superior position with documents blindly followed by villagers.

Chaitya is happy-go-lucky kind of kid who is enjoying his current life filled with happiness while playing around with domestic animals and kids around. The limitations of his world are expanded by his friend cum neighbor “Bacchan” played by Sanket Itankar. The setting up of the village is appropriate but lacs in defining time period and location as some elements create confusion due to contradictions. Some contradictions are difference in dialects of parents and chaitya which doesn’t define a certain location of Maharashtra. Also Chaitya a son of landlord and studying in English Medium goes in open against answering nature’s call while there is a toilet inside home. This must have been deliberately done as an corridor for chaitya to move into other space.

One fine day Chaitya’s mama (played by Om Bhutkar) arrives from nowhere reveals that he is adopted son and his real mother (“Parvati”) has gifted him a magical binocular. The element of binocular changes Chaitya’s vision towards looking at everything from newer perspective. Out of curiosity he asks the name of his real mother to his mama and tries to understand meaning of adoption through his friend. Likewise he tries to understand meaning of a mother through the smaller world he is exposed and then thinks of testing his mother to understand whether she is her real mother. His friend Bacchan chalks out a plan to help him in this process and later reveals that his mother has passed that test.

“Participate in workshops, contents and get a chance to showcase your talent.”

But Chaitya is still not convinced and starts calling her by her name by developing close affinity towards her Grandmother. There is a parallel plot run wherein a cow gives birth to a calf and the events in the life of that animal is used as an metaphor to their lives. In the meanwhile chaitya’s curiosity keeps on increasing and he tries various tricks so that his father postpones the plan of visiting uncle’s home so that he can accompany him after diwali. He succeeds at the cost of life of new born calf of which he feels guilty for some time. The cow stops lactating milk which is stretched inorder to match the pace of original plot which picks up pace on the slow paced built-up in first half.

Chaitya’s life is filled up with joy once his father declares that he is planning to visit his brothers next day, He gets ready to accompany his father but is stopped by his mother out of insecurity. As his father agrees the insecurity of Sumi increases more and more as she is in fear of losing her child. The journey starts in a bullock cart and before passing the river Chaitya reveals to Devi (played by Maithili Thakare) that he is going to meet his real mother and gifts her the stone. Chaitya dips the towel in water as instructed by Sumi to save himself from Scorching Sunlight. Shankar is depicted as someone who is pulling the cart depicted as life single handedly from the point of view of camera. The Canvas of bullock cart  moving from left to right with Chaitya following depicts philosophy of life which moves in circular way. Devi’s message is passed by her mother to Chaitya’s mother who is more worried after understanding that Chaitya has understood the reality and she is about to lose him.

The second act of the story finishes with the death of Chaitya’s Grandmother on the way making the conflict dominating on resolution and stopping Chaitya’s journey in mid-way to make him return back to his village. It slowly builds up again when Chaitya understands that his real mother Parvati is about to visit his home on the demise of Grandmother. While the procession is in progress Chaitya is again filled up with joy and is accompanied by his friend devi to get a glance of his real mother.He tries ways to get attention of parvati (played by deepti devi) in different ways making sumi more and more worried. Will his real mother accept him, will sumi lose chaitya and what will be the reaction of Shankar should be checked in this film.

The camera work of this film is beautiful but it dominates over other department which is negative point of the film if you think film as a collaborative art. Nagraj manjule as dialogue writer has engaged audiences in first half using his most powerful tool of rural sayings/idioms/proverbs which make them laugh. The first half concentrates more on building up the characters and stories which leads to resolutions in second half. Analogy of cow and her baby is used effectively but it should have been converted into some dialogue form as urban audiences are not aware of this process. Chaitya’s innocence is well played by Sriniwas which gets accurate reactions from Devika Daftardaar and this is the pivot point of film around which many sequences are plotted. The Cameo of Deepti devi as parvati can’t be much better than this than anybody. Initial sequences of film are cut out as trailers which fail in attracting audiences to theatre except the song sequence. All in all a good film with great efforts from cast and crew at their level best.